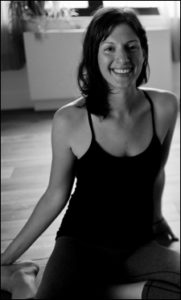 Diana is a licensed physical therapist and certified yoga teacher based in New York. In addition to her private practice, she co-founded the Threes Physiyoga Method, which is taught and used around the country. She has also been an adjunct professor and researcher at Hunter College and Columbia University.

As a physical therapist, Diana spent 7 years practicing at an orthopedic specialty hospital in New York City and has vast experience treating patients with many types of injuries. Her approach is to look broadly at the whole body for impairments and causes of injury and rehabilitate by retraining muscles and rebuilding movement patterns through a combination of physical repetition, postural alignment and mental cueing. Ultimately, her strategy is to get to the root of the cause of injury: the “why” as opposed to the “fix”.

As a yoga instructor, Diana has found that the teachings of mindfulness and breath provides the perfect foundation for facilitating her “re-training” approach to therapy. Adapting vinyasa style yoga postures to physical therapy treatment programs is central to her philosophy of yoga infused physical therapy.

Diana received her B.S. in Biology and Pre-Medicine from American University in Washington, D.C. and her Master’s degree in physical therapy from Hunter College in New York City. She also spent two years as a clinical laboratory assistant in molecular biology at Memorial Sloan Kettering Cancer Center in NYC. She earned her Yoga teacher certification from world-renowned teacher Cyndi Lee at OM Yoga in New York City.