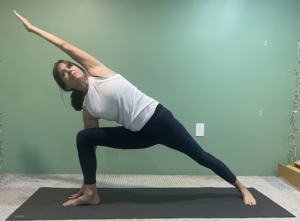 Grace began her yoga journey quite casually, taking classes after work at an Upper West Side YMCA. She quickly fell in love with yoga. After her two daughters were born, Grace began a regular practice in Port Washington. In 2013 Grace began teacher training with a focus on improving her personal practice.  Ultimately she fell in love with sharing yoga. Her passion for yoga is only exceeded by her passion for providing her students with a safe and rewarding experience.
Grace received her 500RYT Certification from Long Island Yoga School in 2014. Additionally, Grace earned certifications in Restorative Yoga (2015) and YogaKids Foundations (2014).
Grace has been teaching yoga since 2014. Her classes emphasize the detail of postural alignment in the asana.  Grace believes that by bringing attention to the physical alignment of the body, we connect with awareness to the energies within the body and as focus turns inward, we gain a greater understanding of ourselves as a whole.